The traditionally accepted idea of evolution is one of gradual change and adaption, but every so often, a disruptive leap forward will occur and challenge the status quo in its very foundation.

Since then, much has changed: The start-up has gone through a successful maturation process that has seen it establish a highly capable executive team and Board of Directors to help it take on the next, crucial growth phase. To mark that new chapter for the company, CEO Daniel Rodgers, says, “we have recently launched a new logo and rebranded the company as Omni Tanker – a name which points to the potential for the company’s technology.”

Backed by a suite of patents granted on the Omni Tanker technology, the company is now making the move to extend its reach to a more broad-based audience – both locally and abroad. “Until now, we’ve been tightly focussed on the chemical transport industry, where aggressive liquids such as strong acids and oxidants place extreme demands on the equipment and the standards call for very safe designs,” Daniel explains. “On the basis of the Omni Tank’s advantages of very high chemical resistance and light weight, we have been able to provide equipment to the leading chemical transporters.”

Daniel lists prominent names such as Toll, Chemtrans, Coogee Chemicals and McColl’s Transport as companies who have embraced the Omni Tanker concept. Now with almost 10 years under the company’s belt, and the design and technology performing well in the market, he says it is time to widen the net. “Behind the scenes we’ve been working incredibly hard to create the right framework to scale up the business,” he explains. “Last year, we moved to a new, expanded facility in Smeaton Grange, in the southwest of Sydney.

It’s a great site with plenty of space, along with a dedicated R&D centre that will allow us to take the business to the next level.” Daniel adds, “Our focus is firmly on innovation, and we believe the environment is right for us to apply what we’ve learned in the chemicals space to the wider tanker market – both here in Australia and around the world. It’s time to make the next move.”

Omni Tanker’s next move will be two-fold, Daniel elaborates, with a strong push into the European chemical tanker market and a broadened product range locally. “The new factory is now up and running, so we have the capacity to significantly increase production for Europe while also enabling improved delivery to our existing customers and the development of new products for the Australian market,” he says.

With the first shipment of five tanks for the European market due to be exported this month, he says Omni Tanker’s next level in operations is imminent: “As an Australian company, exporting manufactured products to a major overseas market is pretty significant, and it’s taken a big effort to get here. There are a lot of moving pieces, from finding the right partner, to securing IP and patent protection, through to completing product development to suit the market needs. It’s been a massive team effort and together we have achieved a huge amount in a relatively short time frame.”

The European model will be marketed under the name the Omni L4 tank and distributed by German tanker specialist, Kurt Willig, which will also provide the chassis and running gear assembly. “We have formed a new, jointly owned company named Omni Willig Carbon GmbH that will take care of the European business,” says Daniel.

He adds that the new Omni L4 model is designed to comply with the European Agreement concerning the International Carriage of Dangerous Goods by Road (ADR) and Rail (RID), and has been certified by the German Federal Institute for Materials Research and Testing (BAM), with engineering oversight by TÜV SÜD.

“We chose to approach European certification in Germany and with TÜV SÜD fully aware that we would have to work to the most rigorous testing, and it has certainly proved to be so,” he explains. “The advantage, however, is that the technical credentials of the product will be recognised as having met the high bar of German certification.”

After a strenuous 18-month process, Daniel says Omni Tanker’s first Type Approval has now been issued, allowing the company to take its game-changing technology to the Eurozone. In Australia, meanwhile, a new general-purpose model is now in the works, with the company aiming to launch it shortly.

The new model will be based on the chemical tanker design, albeit without the equipment required to achieve Dangerous Goods rating. The result, he says, will be a lightweight, yet robust tanker that will “provide a highly significant payload advantage” at a competitive price. “What we are aiming to create is a general purpose tanker with excellent resistance and food grade rating that will deliver superior economic performance,” he says.

While there is still some time before the new model hits the local market, Omni Tanker’s very own Ideas Boom is already well underway. “There is an incredible energy in the business knowing we are about to write a whole new chapter in our story. In a time where local manufacturing is under pressure, being able to stand tall and represent Australian innovation on the global stage is something we are very proud of.” 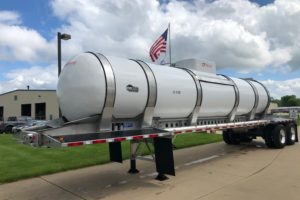 Omni Tanker launches in the US